Maybe hate is too strong a word, but I’m not a fan.

I think it relates to the need to just be in the present moment with the idea, the image and the language. If I try to take an idea and impose form, rather than letting the form be dictated by the image, I often find the sense, the power and the depth of the image are lost.

Or maybe I’m a control freak? Could be.

So it was with the requisite amount of trepidation that I approached my first Renga.

For those, like myself, unfamiliar with the form, a Renga is an ancient (see medieval) Japanese collective poem.  A group of people get together and, led by the Renga Master (what a title), step their ways through twenty verses, each subtly linking to and shifting from the verse before.

The opening Hoku is introduced by the Renga Master and it is then the task of the assembled group to each write their own following verse. The verses run along the 3,2,3… line scheme. The verses are shared and one is ultimately picked to fit the finished poem.  This process happens by some kind of subtle understanding that falls upon the group and is completed by the expertise and wisdom of the Renga Master, who has the final say.

There is more to it, even, than this, but this will have to do for now.

So when invited by my lovely poet sister-in-law Fiona Lesley to Join the Renga happening at last weekend’s Wise Words Festival in Canterbury, I was intrigued.  By Friday night I was apprehensive and by Saturday morning I was terrified.

The fear was threefold. One, I have no experience of Renga. Two, I’m not  a fan of sharing my raw, unedited, process. And three, there’s that pesky form to worry about.

But my fears were, thankfully, ungrounded. Firstly, Renga is accessible to anyone, even non-writers (of whom there were some numbered in the group). Secondly, everyone is sharing their process, it’s not so scary in a group. Third, the form is so light, so supportive, that it feels almost strange to return to writing outside of a group. Here I am throwing down these words without the gentle uplifting reassurance of shared experience.

So there it is. A New Form that is about progression, about non-linear linking, about connectedness and individuality.  Renga is an ancient art form that engages with something very contemporary. The experience was an utter joy.

Will I do it again? If anyone wants to invite me, sure, absolutely.

Have I learned anything new? More than I can express.

Has it informed my work? Yes, yes, yes! I’ll be much freer with my sharing (if it pleases) from now on. Maybe I’ll censor my work less, be more honest and engaged with my readers. I think, as an art form, Renga is beautiful and enriching. But it is its participatory nature that leaves the lasting brand on my creative mind.

Thank you Subhadassi and Fiona for opening new horizons and unlocking those I had forgotten. 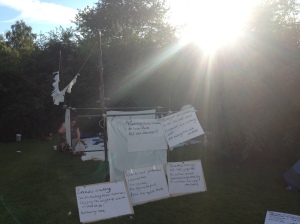 © Arwen Xaverine and Curious Little Books, 2013. Unauthorized use and/or duplication of this material without express and written permission from this blog’s author and/or owner is strictly prohibited. Excerpts and links may be used, provided that full and clear credit is given to Arwen Xaverine and Curious Little Books with appropriate and specific direction to the original content.

If you wish to use or reproduce my work, or if you are interested in working with me please contact me direct: arwen.xaverine@gmail.com